I had a bit of business book success a few years ago when I put Notch’s – the creator of Minecraft – bio on the shelves at my first library, but books about successful businesses aren’t always easy to come by for a middle grade audience. This new series from Case Marketing founder Lowey Bundy Sichol tries to fill some of that gap, taking brands that are uber-popular with tweens and breaking down the companies’ histories, successes, and setbacks.

From an Idea to Disney is part bio on Walt Disney, part bio on his empire, from Mickey Mouse and Steamboat Willie to Disneyland, Disney World, and all of Disney’s acquisitions. The chapters are quick, explain business practices in plain language and include callout boxes with definitions for specific business terms. Disney’s story focuses on the development of the family-friendly, inclusive brand, Walt Disney’s desire to create full experiences for families at his parks, and how the Disney family pushed back at what they perceived an over-merchandising of the brand in the 1990s, bringing about a management change that brought Disney back to Walt’s original vision.

Inspirational quotes from Walt himself run throughout the book, and black and white line drawings add visual interest. A Walt Disney Company timeline, bibliography, and source notes round out the volume. 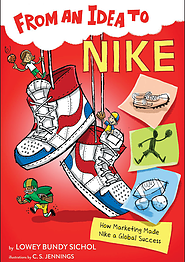 Global athletic shoe giant NIKE began as high school athelete Phil Knight’s grad school project for an entrepreneurship class. Despite pushback from his critical father, he made a go of it, bringing his high school track coach, Bill Bowerman, into the fold. Bowerman would go on to create the “waffle iron soled” sneaker that would grip surfaces better – and ruined his wife’s waffle iron in the process. From an Idea to NIKE concentrates on the value of marketing in NIKE’s success, from athletic endorsements, to the Just Do It campaign, to running different sales channels, including NIKETown stores and the ability to order customized shoes online. The book mentions NIKE’s struggle to survive shortly after going public, when Reebok rose to popularity in the early ’80s; their quest to gain footing in Europe and the soccer market, and dealing with endorsed athlete scandal.

As with From an Idea to Disney, From an Idea to NIKE is loaded with fun facts, business term callouts, quotes from Phil Knight, and black and white line drawings. There’s a NIKE timeline, a list of the brand’s top endorsement deals, a bibliography, and source notes.

If you have nonfiction readers that have an interest in how business or brands work, stick a toe into the water and put a few of these into your collection. They’re quick reads and offer a beginning look into the business world. Focusing on entrepreneurs can be inspirational for readers – consider a book club or program where kids can come up with their own entrepreneurial idea? Have books like Jessie Janowitz’s The Doughnut Fix and Jacqueline Davies’s The Lemonade War handy. Other titles in the series include From an Idea to Lego and From an Idea to Google.

I'm a mom, a children's librarian, bibliophile, and obsessive knitter. I'm a pop culture junkie and a proud nerd, and favorite reads usually fall into Sci-Fi/Fantasy. I review comics and graphic novels at WhatchaReading (http://whatchareading.com). I'm also the co-founder of On Wednesdays We Wear Capes (http://www.onwednesdays.net/), where I discuss pop culture and geek fandom from a female point of view. View All Posts

Find me on Social Media!